Threats to our Oceans

World Oceans Day on June 8th gives us the opportunity to reflect on the importance of our oceans, and what we must do to protect them. The oceans are our planet’s life support system. They feed billions of people around the world, drive our climate, absorb heat and carbon dioxide, and produce 70% of the oxygen we breathe. All life on Earth depends on the oceans, and now our oceans depend on each and every one of us. We must make changes now, to curb the effects our actions have on the health of the oceans, before it is too late.

Whether we realize it or not, incremental changes to our climate can cause drastic changes to oceans in both volume of water and level of acidity, which have a significant impact on overall health. The world’s oceans absorb roughly 90% of climatic heating, causing their volume to increase through thermal expansion, resulting in a rise in sea level. Since 1950 sea levels have risen 8 inches, and since 2006 they have risen at an accelerated rate of 1 inch every 3 years—with projections of another 8 inches in the next 20 years. As this heat is absorbed into our oceans, temperatures increase as well. Since 1970, ocean temperatures have increased by 1 degree, forcing coral to expel the symbiotic algae that live inside them, a process also known as coral “bleaching”. In many circumstances this causes irreparable damage to our reefs, transforming them from vibrant, colorful oases of life into barren and decaying skeletons.

Too Much to Absorb

Our activity has also been responsible for global changes to ocean pH levels, critical to ocean food chains and a balanced ecosystem. Carbon dioxide (CO2) concentrations in our atmosphere have risen 46% since 1950 due to the burning of fossil fuels, and are currently at 3 times the level that the ocean can safely absorb. The extra human-generated carbon dioxide is saturating ocean waters, forming carbonic acid, a process called ocean acidification. The historical pH level of our oceans was 8.16. That number has increased by 25%, resulting in higher acidity that has the capacity to dissolve the shells of plankton, corals, oysters, clams, shrimp, crabs and lobster, which has catastrophic implications for the delicate balance of the food webs of our oceans.

We must stop the land-based activities that are directly polluting our oceans and coastal waters, actions that create over 85% of all pollution. We should make it our personal mission to leave our beaches cleaner than we found them by picking up discarded trash and debris that can contaminate our waters and our shorelines. We must get involved with our state, local and federal representatives and demand that they prioritize clean water initiatives that keep our waters free of toxic algae and other pollutants that are harmful to aquatic plants, animals and humans. We must place a moratorium on offshore and below ground oil and gas exploration that place a detrimental—and potentially catastrophic—burden on our environment. If we want the degradation of our ecosystems to stop, we must take action now to protect and restore our oceans and Florida’s coastal environments.

We at Florida Oceanographic believe that together we can be the next wave for change, to secure the future of our world’s oceans by increasing awareness of the problems they face, and by inspiring stewardship of our living coastal ecosystems. By volunteering our time and voting for candidates that prioritize the environment we can create the change that we want to see in our world. 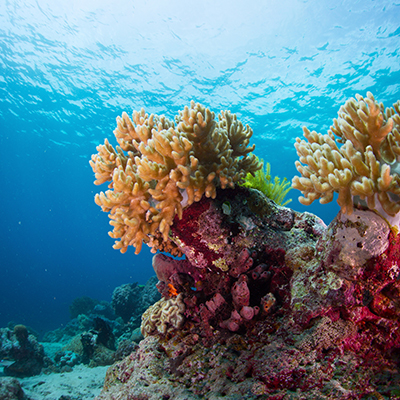