Click here to view current conditions at the Coastal Center 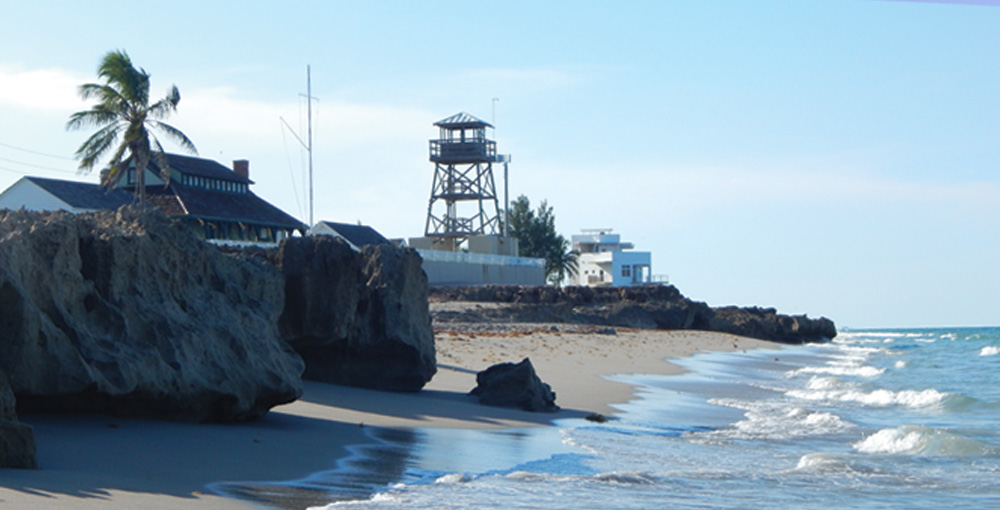 Click here to view current conditions at the House of Refuge

Since 1984, Florida Oceanographic Society has partnered with the House of Refuge on Hutchinson Island to provide pertinent weather updates to Martin County residents, visitors and businesses. With the help of its volunteers and supporters, realtime weather conditions are now available digitally.

Weather is extremely important and variable in South Florida. If you have ever complained about the weather down here you have probably heard someone say, "Well wait 15 minutes and it will change." South Florida does not have four seasons; it only has two, a wet season and a dry season. The dry season is during the winter and early spring months. The wet season is the summer and fall when afternoon thunderstorms, tropical moisture and hurricanes dominate the weather.

See below for other valuable weather resources

Hurricane season officially runs from June 1 to November 30. Hurricanes usually form between July and October. A hurricane is a tropical cyclone formed over the North Atlantic, E North Pacific, W South Pacific, and Indian oceans in which the winds attain speeds greater than 74 mph (121 km/hr). A tropical cyclone passes through two stages, tropical depression and tropical storm, before reaching hurricane force. An average of 3.5 tropical storms per year become hurricanes; one to three of these approach the U.S. coast. A hurricane is nearly circular in shape, and its winds cover an area about 500 mi. (800 km) in diameter. As a result of the extremely low central air pressure (around 28.35 in. / 72 cm of mercury), air spirals inward toward the hurricane's eye, an almost calm area about 20 mi. (30 km) in diameter. Deriving their energy from warm tropical ocean water, hurricanes weaken after prolonged contact with colder northern ocean waters, becoming extratropical cyclones; they decay rapidly after moving over land areas.

Hurricanes cause high winds, heavy rains, flooding, storm surge, and may even spin-off tornados. The storm surge is the most dangerous and damaging part of the storm. The strongest hurricanes can cause water levels 18 feet above normal high tide.

Hurricanes may be destructive but they play an important role in controlling the global temperature. By means of the large heat capacity and latent heat of evaporation of the ocean's water, they transport great quantities of heat energy into the heat-deficient higher-latitude regions. For every gram of water evaporated from the surface of the ocean, the hurricane gains 585 calories of heat energy. This adds up to an amazing amount of energy. The energy in one hurricane is greater than the energy consumption of the United States for the past 20 years. An atomic bomb explosion in the center of a hurricane would have no effect on the storm. The energy would be quickly sucked up through the eye and distributed throughout the system.

Tropical Disturbance - A discrete tropical weather system of apparently organized convection--generally 100 to 300 miles in diameter-- originating in the tropics or subtropics, having a nonfrontal migratory character, and maintaining its identity for 24 hours or more. It may or may not be associated with a detectable perturbation of the wind field. In other words, a blob of thunderstorms.

Tropical Depression - A circulation at the surface of the water with a sustained wind speed of 38 miles per hour or less.

Tropical Storm - A cyclonic storm with distinct circulation having sustained wind speeds ranging from 39 to 73 miles per hour.

Hurricane - A severe tropical cyclone originating in the equatorial regions of the Atlantic Ocean or Caribbean Sea, traveling north, northwest, or northeast from its point of origin, and involving heavy rains and sustained winds of 74 miles per hour or greater.

Saffir/Simpon Scale - A scale used to measure the strength of tropical storms.

These contents can be assembled over a five month period on a weekly basis, and perishable items should be changed or replaced every six months.

For more information on assembling and refreshing supplies, contact the American Red Cross for their Disaster Supplies kit brochure.

Food: Minimum 3-day supply of non-perishable food that requires no refrigeration, or preparation, and little or no water, for example:

First Aid Kit: (one for your home and one for each car)