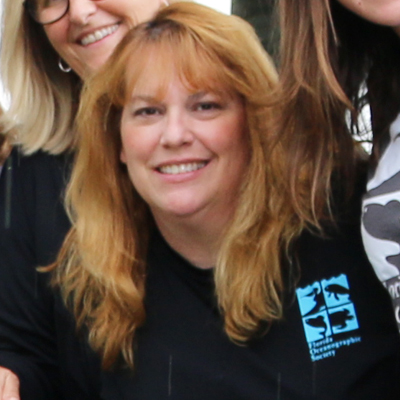 “A friend invited me to go on a nighttime turtle walk, and I was enthralled,” says Melinda. “As an FOS volunteer, I get to share why it’s so important to preserve sea turtles and hopefully inspire our visitors to be more turtle-friendly in their own lives.”

About 90% of sea turtle nesting in the U.S. happens in Florida, and Hutchinson Island is prime nesting area. Under a Florida Fish & Wildlife permit, Florida Oceanographic Society’s trained staff and scouts conduct nighttime beach walks during June and July to give visitors a glimpse into the amazing life of a Loggerhead sea turtle. Melinda has been part of that team since 2014 as a scout for nesting turtles. This year, she’s supporting the classroom education portion of the turtle program, where visitors learn about the species that nest on Hutchinson Island and the damaging impacts of pollution, coastal development, fishing and harvesting. She volunteers each week during the nine-week program. Registration is required for the walks, which create a safe and legal way for people to learn about local nesting sea turtles.

One of Melinda’s favorite turtle scout stories is what she calls “the trifecta.” “Several species of sea turtle nest on Hutchinson Island, mostly in different months but sometimes they can overlap,” says Melinda. “One night, we saw the trifecta – a Loggerhead, a Leatherback and a Green sea turtle – it was the perfect storm.”

Melinda is a Pennsylvania native who followed her mother and sister to Jensen Beach in 2004. Her family had lots of pets when she was a child, and love of animals is a big part of her life today. She fosters kittens for the Peggy Adams Animal Rescue League in West Palm Beach and has volunteered as a Sea Turtle Education Docent for the Loggerhead Marinelife Center in Juno Beach.

“I think my favorite part is watching a female go back into the sea after laying her eggs,” says Melinda.  “It’s just so majestic – her work is done and she slips quietly back into the water and is so quickly gone. It makes a lasting impact on people who get the chance to see it.”