It was about three years ago when Dave Carlson’s passions for veterinary science and water quality collided head-on during Florida’s blue-green algae crisis. Dave has since retired from his 45-year career as a veterinarian, but at the time he was working in Martin and St. Lucie counties. He had also been water quality testing for Florida Oceanographic Society for several years. After several dogs exposed to cyanobacteria in the Indian River Lagoon became ill or died, Dave coordinated a meeting of the Treasure Coast Veterinary Medical Association to help local veterinarians recognize and understand what they were dealing with. One of the outcomes of that meeting was a brochure doctors can share with pet owners. Dave worked on that piece with Dr. Vincent Encomio, a Florida Sea Grant agent with UF/IFAS Extension and former director of scientific research for Florida Oceanographic Society.

Since 2014, Dave’s given more than 550 hours of service as a water quality tester for Florida Oceanographic Society. He’s been involved in the Rivers Coalition for quite a while, and served on the Indian River Lagoon Council for several years. He has been an advocate at both South Florida Water Management District and U.S. Army Corps of Engineers meetings. After retiring from veterinary medicine this past summer, Dave expanded his volunteer role to become an Exhibit Guide at the Coastal Center. “Water testing fit my schedule when I was working but it’s a solitary job,” says Dave. “Now that I have more time, I wanted to do some on-campus volunteering in addition to testing. I’ve made some great friends, and shared what I know about the water quality situation with them. I think I was placed on the planet to help pets, people and the environment.”

Dave and his wife Patti will celebrate their 32nd anniversary in 2022, and have lived in Florida for 20 years. Between them they have four sons, though Dave’s younger son Chris passed away at age 19 from a rock-climbing accident. Dave likes to stay active, and he still rides the same bike he took on long rides with Chris. He also likes to walk and workout on the elliptical. “It’s so important to stay busy and keep challenging yourself mentally,” says Dave. “I’ve found a wonderful place to do that with Florida Oceanographic Society. Mark Perry and his team have done a very good job of creating a strong esprit de corps, and it doesn’t matter what you want to do – there’s a job here for everyone.”

Former owner: Three veterinary practices and an emergency facility, all in Massachusetts

Most unusual case: A carnival elephant with a foot abscess Dr. Carlson treated in his rookie year 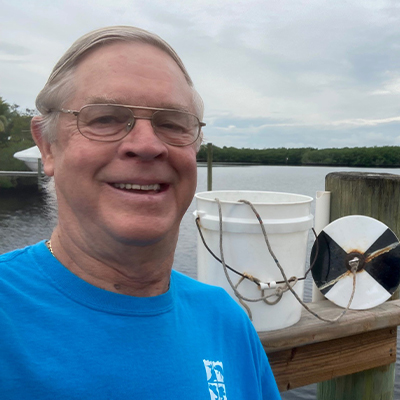