Bacteria, algae and — believe it or not — millions of dead clams: It's all in the water along the Treasure Coast; and it's all nasty.

The Florida Department of Health in St. Lucie County issued a warning Thursday afternoon not to swim at the South Beach Causeway along the Fort Pierce Inlet on Hutchinson Island because of high levels of enteric bacteria, an indication of fecal pollution.

A similar warning remains in effect at two sites on the North Fork of the St. Lucie River: River Park and Veterans Park.

The department has rescinded a warning not to swim at Jaycee Park along the Indian River Lagoon on Hutchinson Island in Fort Pierce.

Potential health risks for those who ingest or come in contact with the water include upset stomach, diarrhea, eye irritation and skin rashes.

The health department considers levels above 70 enteric bacteria colonies in a 100-milliliter water sample to be unsafe.

Samples taken Monday at the causeway had 87 colonies; a sample Wednesday had 885 colonies.

The advisory will remain in effect until results show consistent readings in the good range.

Samples taken this week at sites in Martin County —  Leighton Park on the St. Lucie River in Palm City, Sandsprit Park on the river in Port Salerno and the Stuart Sandbar in the Indian River Lagoon between Sewall's Point and Sailfish Point — were all in the acceptable range.

Enteric bacteria typically gets in waterways when heavy rains — like those in the area recently — wash fecal matter from pets, livestock and wildlife into the water.

Leaky septic systems and sewage lines also can cause the bacteria to enter waterways.

Staffers from the Florida Department of Environmental Protection took samples Wednesday of a possible blue-green algae bloom at Harbortown Marina off Taylor Creek near the Indian River Lagoon at Fort Pierce.

Results of tests to determine the type of algae and whether it contained toxins were not available Thursday afternoon.

"I knew what it was right away," said Loveridge,a Florida native.

At first, Janet MacNaughton thought there were tiny Styrofoam balls floating in the canal behind her house.

On closer inspection, they turned out to be tiny clams, each about the size of a slightly used pencil eraser.

"They were all through the water," MacNaughton said, "and Wednesday night there were even more jammed up against the seawall. I've lived here 30 years and never seen anything like this."

Millions of tiny clams can be seen Wednesday evening, Aug. 21, 2019, washed up against a seawall in a canal off the the St. Lucie River in Palm City. (Photo: Contributed photo by Alan Winchell) Staffers at the Florida Oceanographic Society on Hutchinson Island in Stuart determined the clams probably lived on the bottom of the canal or the St. Lucie River.

They could only guess why they died and showed up behind MacNaughton's house.

Recent heavy rains have wiped out the salinity in the normally brackish estuary, said Pam Hopkins, a research associate at the society. 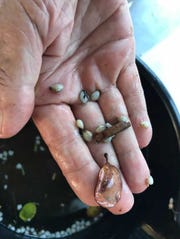 Janet MacNaughton holds a few of the clams she found Wednesday, Aug. 21, 2019, in the canal behind her house in Palm City. (Photo: Treadway, Tyler)

"A third of our sampling stations reported zero salinity," Hopkins said. "If this was a species of clams that requires salty water, they could have died from too much fresh water."

Even if the clams can survive in fresh water, said Zack Jud, the society's director of education and exhibits, a lack of oxygen in the water could have killed them.

Besides, Taylor Creek and the C-25 Canal in St. Lucie County aren't connected to Lake Okeechobee.