Join our Research Department on Thursday, September 17th at 1:00pm for an online presentation on some of their latest projects. Research Assistant Samantha Smith will be discussing how different environmental conditions influence spat recruitment at restored intertidal oyster reefs in the St. Lucie Estuary and Indian River Lagoon. Our summer intern, Marco Vallejos, will present his findings on the accumulation of microplastics in seagrass habitats.  Presentations on each topic will be 15 minutes long with time for questions. Register now to learn more about ongoing research in your local waterways.

By: Marco A. Vallejos

Most notoriously known from the visible garbage gyres in all oceans, mass societal waste of single-use plastic also degrades into microplastics classified as fragments, strands, and nodules less than five millimeters. Seemingly un-identifiable in the field and difficult to mitigate by current pollution reduction techniques, these petroleum by-products have been found in many marine ecosystems suggesting a level of unanticipated permanence. It is evident that microplastics exist across multiple marine habitats, yet accumulate in greater quantity in lower velocity environments such as seagrass beds. Our study examined if Halodule wrightii (shoal grass) beds accumulated microplastics within their habitat to a greater extent than that of a bare sandflat habitat. We hypothesize a higher level of microplastics to be found in the seagrass habitat as the blades of H. wrightii reduce water velocity within the seagrass canopy, which results in increased sedimentation and reduced resuspension of microplastics suspended in the water column. To determine the efficacy of H. wrightii as a catchment and sink for the plastic remnants, we examined the presence of microplastics on seagrass blades and in sediment cores to determine the location of microplastics within the bed. In August of 2020, samples were collected in twelve plots (6 with and 6 without seagrass) at the Florida Oceanographic Coastal Center in the Indian River Lagoon, Florida. At each plot, we collected surface water, sediment surface water, sediment cores, and seagrass blades. In each seagrass plot, we measured the percent occurrence, percent cover, seagrass density, and canopy height by species. Shore dynamics, including tidal fluctuation, are expected to spread microplastics uniformly in the surface water. However, based on early results, we anticipate that majority of microplastics will be fibers and will be more abundant in the seagrass habitats indicating H. wrightii beds effectiveness as a microplastics catchment. 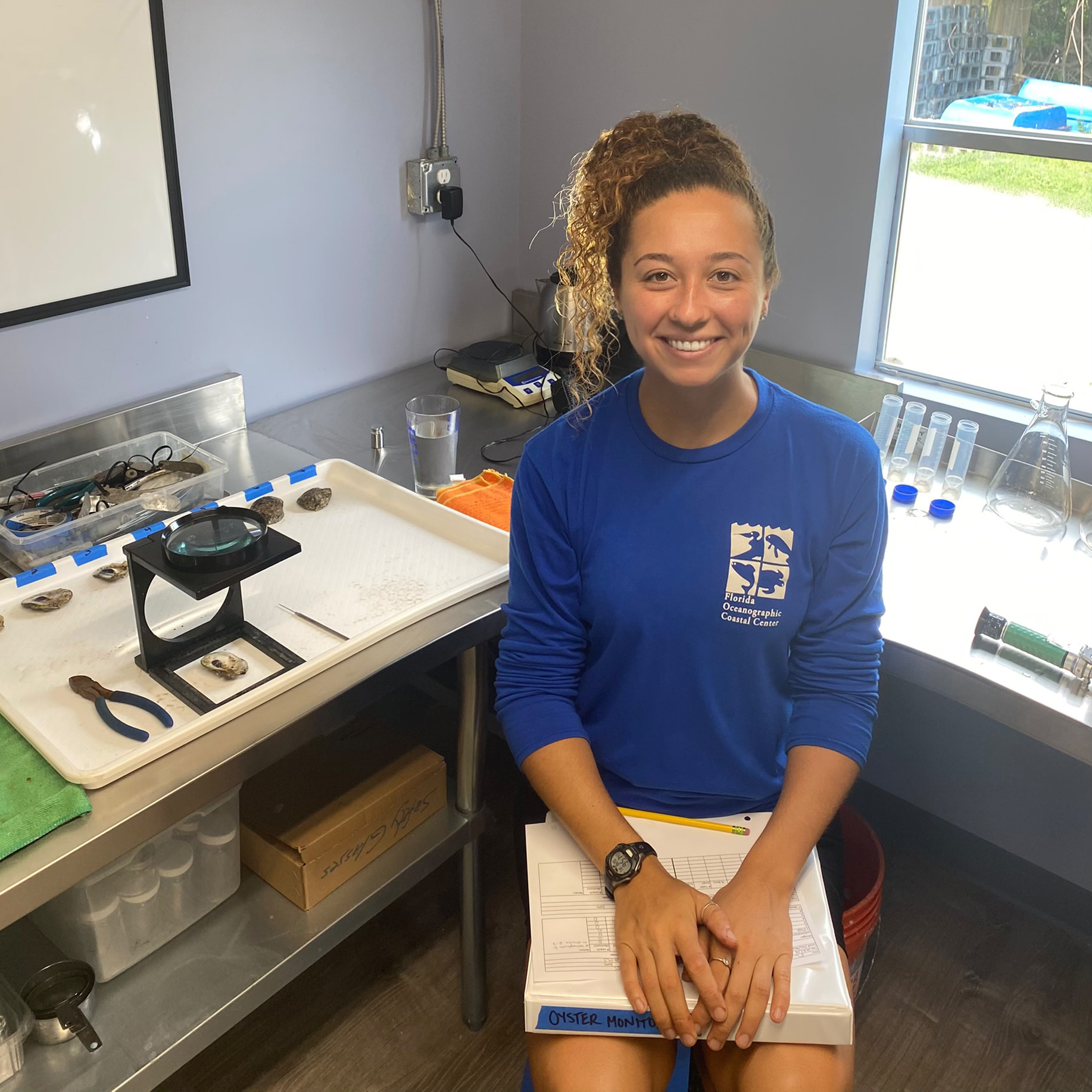 Oysters (Crassostrea virginica) construct valuable aquatic habitats known as oyster reefs, which provide a myriad of ecosystem services, while also acting as indicator species towards assessing water quality and the health of coastal waters. Oyster restoration efforts aim to improve aquatic environments through the construction of man-made oyster reefs, thus providing hard substrate for larval oysters or spat to settle upon, grow, and continue reproducing. The health of a restored reef may be based upon the amount of spat recruitment and settlement within a restored area. However, changes in water quality may negatively affect the health and success of a restored oyster reef. Fresh water discharges from Lake Okeechobee, Florida via the C-44 canal and residential, agricultural, and storm water runoff via the C-23 and C-24 canals, often disrupt the water quality of the St. Lucie Estuary (SLE) system. This study aims to identify variations in spat recruitment within the SLE and southern Indian River Lagoon (IRL) and analyze how different environmental conditions influence spat recruitment at restored intertidal oyster reefs. Spat were collected monthly from six site locations. Three sites were located within the SLE and three sites were located along the southern IRL. Individual oyster T’s comprised of a PVC "T" design, outfitted with galvanized steel ‘stringers’ each holding clean dry oyster shells, were deployed for 4-5 week intervals over a 3-month period. Each month, stringers were collected and C. virginica spat were counted. Results suggest that variations in water quality within the SLE and southern IRL affect spat recruitment at restored reefs.