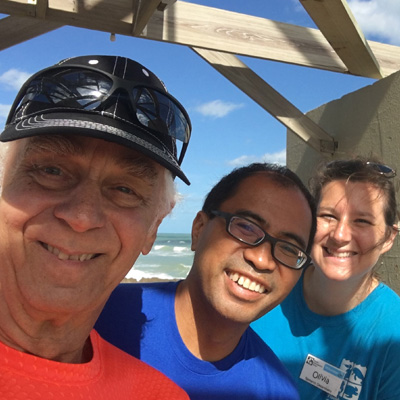 Florida Oceanographic Society welcomes back volunteer George Gross, one of our early board members in the 1970s. About eight months ago, George rejoined our volunteer community, and has been working with Dr. Encomio to update Florida Oceanographic’s Weather Station technology at the House of Refuge.

“The House of Refuge is prime territory for monitoring prevailing winds because of its location,” says George. “Advances in technology now allow us to easily log this great data and also provide it real-time over the internet. We would love to marry our information with water quality data for even better insight into the local environment. It’s a valuable service to provide to the community and other researchers too.”

George first connected with Florida Oceanographic Society’s Executive Director Mark Perry through George’s father, a professor at Florida Institute of Technology where Mark attended school.  After earning his bachelor’s degree in electrical engineering in the 1970s, George and his family opened a Radio Shack franchise in Stuart. George and Mark ran into each other around town, and soon Mark asked George to get involved with Florida Oceanographic. “A group of us had this idea of a dial-up weather service that people could phone before going out on the water. Mark asked us to build it, and we did,” says George. “I wanted to support the mission and better environmental stewardship, so I was a board member for several years.”

George sold his Radio Shack after 10 years and joined Florida Power & Light’s nuclear division. He married his wife Luisa, and the couple had two daughters who are now grown and live in Florida and Kentucky.  After a 30-year career with FPL, George found he had the time again to volunteer. He’s very passionate around two topics: the environment and organ donation. “A few years ago I was able to donate a kidney to my wife who was going into renal failure. Our transplant team made the whole operation so easy and the outcome was so beneficial that I just can’t keep my mouth shut about it. If medical science can do that, what can the rest of us do to protect Mother Earth?”

“Coming back to Florida Oceanographic was an easy choice for me,” he adds. “I’m thrilled by the growth of the Center and the amazing work that’s happening here. I give Mark Perry so much credit for his drive and vision, which have really made the original idea into a reality.”