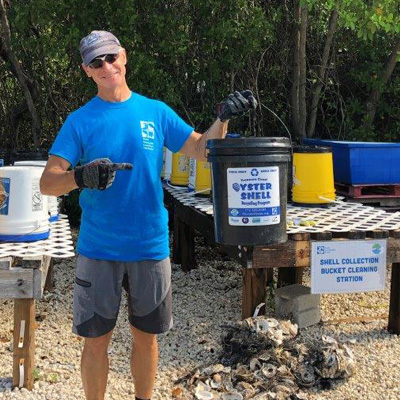 Ever wonder what happens to the shucked shells after you’ve enjoyed oysters at one of the Treasure Coast’s outstanding seafood restaurants? They’re collected by Florida Oceanographic Society staff along with FOS volunteer John Trahan, who makes the rounds to local partner restaurants a couple times a week. The 2.5 tons of shells that John and other volunteers collect each month are the raw resources for the Florida Oceanographic Oyster Restoration (FLOOR) program.

“An adult oyster can filter up to 50 gallons of water each day, so they have a critical role in keeping the waters of the St. Lucie River and Indian River Lagoon clean,” says John. “However, oyster populations in the St. Lucie are decimated by the freshwater discharges. We’re reusing the oyster shells to create new oyster reefs and restore the local waters.”

John and his wife Laura Elsenboss began volunteering for FOS when they moved to Stuart from Connecticut in 2014.  A marine engineer by trade, John retired from a 31-year career at General Dynamics Electric Boat, where he worked on submarine design, construction, quality and safety. Prior to submarines, he was at sea for nearly three years working on tankers, bulk carriers, and a NOAA research vessel engaged in mapping the ocean floor. It was a career he loved.

Now, John’s involved in the FLOOR program as one of several volunteers helping to move the shucked shells from restaurants into shell bags at the Coastal Center. He also helps move the net bags into the St. Lucie and the Indian River Lagoon where they become habitat for new oysters to recolonize. The new reefs serve as a structure to repopulate oysters and help the estuaries recover more quickly after discharges. John notes deployment of the shell-filled net bags, which weigh about 20 pounds each, is like stacking sandbags in waist-deep water. Read more about FLOOR.

Retirement allows John and Laura to spend more of their time on long-distance cycling trips. In 2014, they took an 8-month, 6,000-mile cross-country trip from Stuart through the northern Midwest and on to San Diego. This fall, they’re planning to bike to Key West. They have a Europe trip planned for next summer that involves airplanes, repositioning cruises, and lots of cycling. John also runs every day.

In addition to supporting the FLOOR program, John volunteers at many FOS events. “FOS operates as a local, professional, research-based nature conservancy, and I really appreciate the work they do,” says John.